We shared a joint …

… meeting with NDG Leader Toastmasters! (Ha ha, we had you!).

On July 25, 2019 Beyond Words came together with NDG Leaders Toastmasters to conduct a joint meeting. Held at NDG Leader’s charming meeting venue at St. Thomas Church, it was a meeting that saw the best of both worlds, as Beyond Words set the bar high for an advanced Toastmasters meeting and the dynamic members of NDG leaders raising to the challenge. 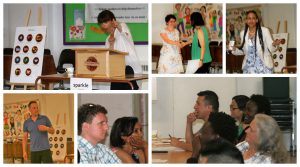 The theme for the meeting was Fireworks and we got cracking in no time. NDG Leader’s president, TM Nabila Bourezane kickstarted the meeting, welcoming the guests and introducing the head table.

Following the business session, the Toastmaster of the day, DTM Aurore Liang took over to conduct the education session, which consisted of two brilliant speeches:

The THINK FAST! session was led by Beyond Words’s president TM Katy Morin. She had the participants working in pairs enacting various situations. Would be for or against Silent Fireworks ? How’d you convince a firework competition organizer to have you onboard as a judge ? How would you as someone who could only see but not hear, explain the fireworks to someone who can only hear but not see? All the participants did a fantastic job. After each conversation, members were randomly called upon to provide an instant evaluation.

The Coaching session was led by Beyond Word’s VP – Public Relations Gabriel Duguay. The evaluations followed Beyond Words’ advanced evaluation style – a content evaluation, a delivery evaluation and a round robin evaluation from all the members. After the evaluations, the advanced timer report was delivered by DTM Oren Weintrub (from NDG Leader). TM Cilei Ribeiro (NDG Leader) reminded us to not use so many so’s in her Ah Counter report and Grammarian for the day TM Sonia Gaona (Area 64 Director) recounted the bazillion times we sparkled by using the word of the day which was “Sparkle”.

This entry was posted in Special event. Bookmark the permalink.